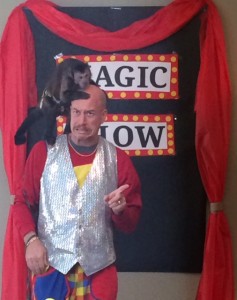 The #1 choice for a Magician Raleigh NC is Magic by David. Raleigh Magicians, Magicians Raleigh NC.

Trying to find the right magician in Raleigh North Carolina that specialize in family and children’s entertainment can be a very difficult task. However, let one Raleigh magician – Magic by David help ease your fears by providing high caliber family FUN entertainment that’s perfect for kids and ADULTS! Every magic show is backed by a 100{1741d2f95eed460f2001898593df9fb7c0b0a2529ccb5ef95287a87d4a89f2c3} satisfaction guarantee.

Great for birthday parties, schools, churches, or any event. Great for any age. Perfect for making your event unforgettable. Book this Raleigh NC Magician  now by calling him 919-266-1682. Ranked #1 as a Magician in Raleigh North Carolina. Past clients rave about Magic by David. Hear them for yourself at www.davidmagic.net.